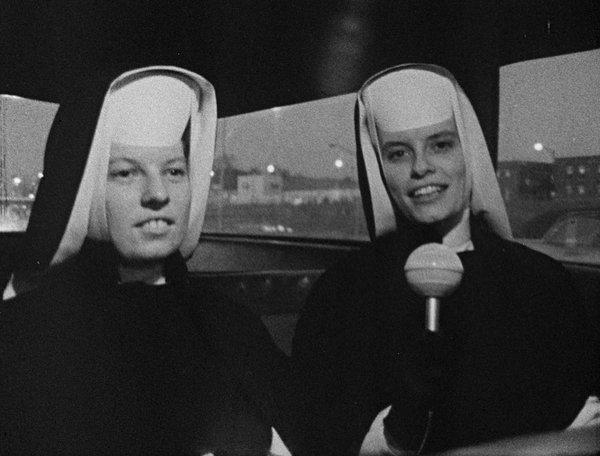 Last week the Ramonat Scholars attended a screening of the 1968 documentary Inquiring Nuns at the Gene Siskel Film Center. The hour-long film featured two nuns, Sisters Marie Arne and Mary Campion, approaching strangers on the streets of Chicago with a deceptively simple question: are you happy?

In their final blog posts of the semester, many of the Ramonat Scholars argued that Inquiring Nuns reflected a broad range of historic themes covered in class. The nuns traveled to parishes, museums, and storefronts throughout the city in discovery what made Chicagoans happy (or unhappy) in 1968. In the process, they confronted diverse opinions about race, class, religion, national politics, and the Vietnam War. The nuns’ “social experiment” came on the heels of the explosive 1968 National Democratic Convention, and many Chicagoans expressed concern to the Sisters about the country’s political and moral stability. Other respondents focused on more personal issues facing their communities, which suggested the enduring power of local politics and local parishes in Chicago neighborhoods. The Ramonat Scholars also drew connections between Inquiring Nuns and the history of Catholic women in anti-war demonstrations, social welfare, and community activism. As one Scholar argued, the determination of Sisters Arne and Campion to understand what made Chicagoans happy exemplified the historic pursuit of a “social good” among American Catholics.

The Ramonat Scholars and Dr. Shermer at the Gene Siskel Film Center on December 3, 2018  (Ruby Oram)

The Ramonat Scholars are on winter hiatus after a productive semester. Check back in January when the Ramonat Seminar reconvenes to explore more histories of Catholics and American politics.