An Italian Jesuit, Fr. Roberto Busa, is often recognized as the first person to “do” the digital humanities. Beginning in 1949, he teamed up with IBM to use computers to compile a concordance (an index of all the words in a work) of the works of Thomas Aquinas. Busa worked on this project for most of his life, and his data moved from analog form, to punch cards, to magnetic tape, to CDs and then onto the Internet. As computer technology developed, humanities scholars became increasingly interested in the possibilities of using computers in their work.

In the 1990s, “digital history” emerged as a distinct subset of the digital humanities. It was championed by Roy Rosenzweig, founder of the Center for History and New Media (now the Roy Rosenzweig Center for New Media) at George Mason University. In discussing digital projects, the class looked at four digital history projects that represented a range of subjects, purposes, and budgets. They were: 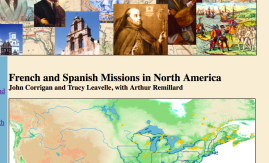 Discussion in class focused on how all four of these digital history projects tried to make history more accessible and interesting for the intended audiences. The general consensus was that participatory features, like the ones on the Amboyna site, were really important in making a site engaging and interesting, and to its ultimate success.

Stay tuned as the Ramonat Scholars embark on their own digital project: mapping with Google Fusion Tables!